London is always full of wonderful exhibitions and events, and recently on a trip to the city, I wanted to visit the new Design Museum which has relocated to Kensington High Street. After visiting the previous location near Tower Bridge a number of times, I was excited to see the new architecture and interior of the new building. 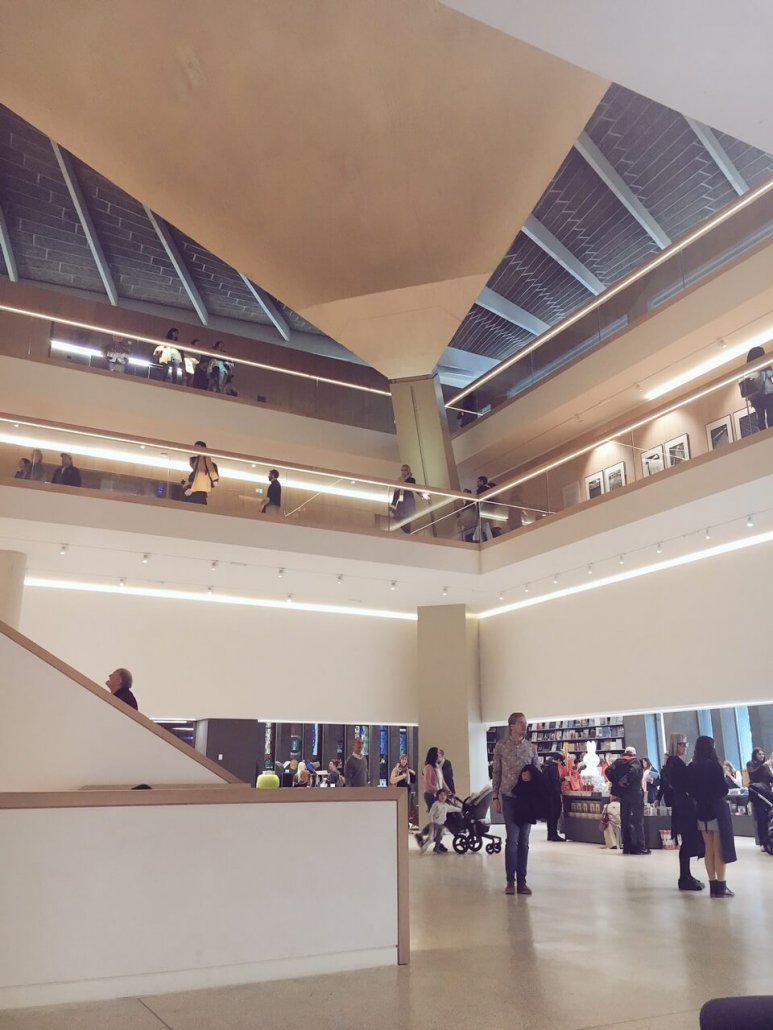 The minimalist designer John Pawson has envisioned the museums interior, which centres itself around the large, square atrium, ringed by the walkways that lead to the museums facilities. This atrium is theatrical, a place that welcomes the museum and displays the movement of visitors around a slow, square spiral of stairs allowing them to pause and enjoy the space. Timelessness is profound in the architecture of the building, hosting certain calmness when entering the building.

Upon reaching the first floor of the museum, I came across the ‘Designer Maker User’ exhibition which invites you to explore design from the perspectives of all three processes. It shows how designers respond to the needs of makers and users, how users consume and influence design and how revolutions in technology and manufacturing transform our world. The show discusses ever-relevant design issues, such as the relationships between cost and value, style and fashion, choice and taste and the timeless debate ‘what is good design?’ 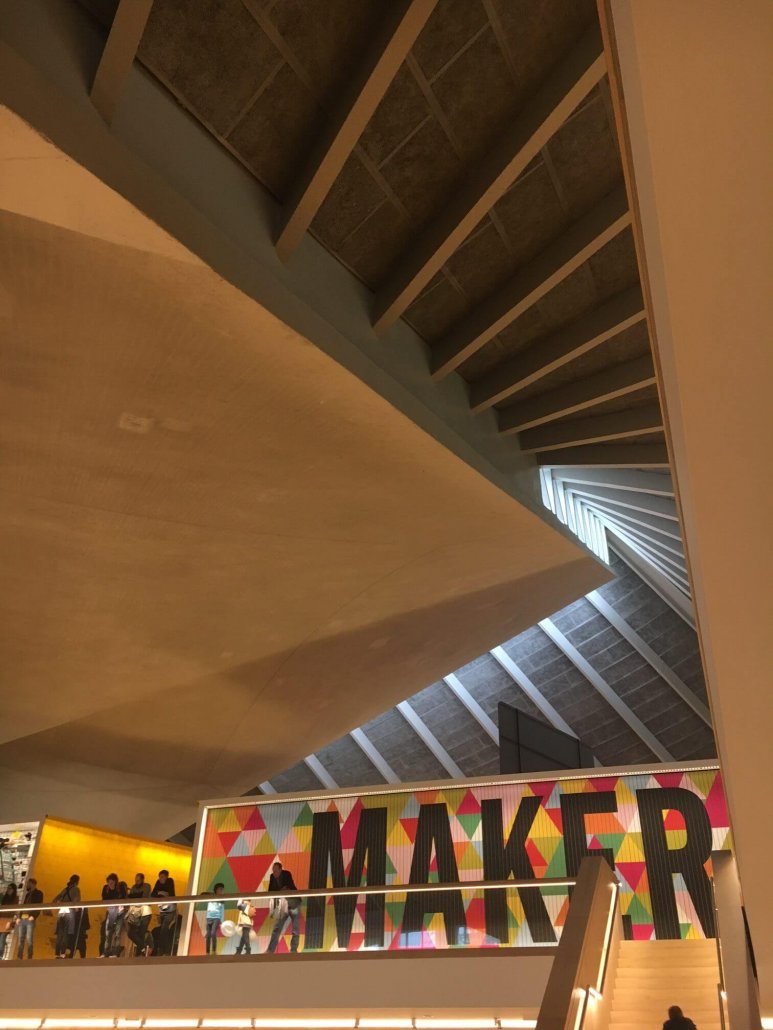 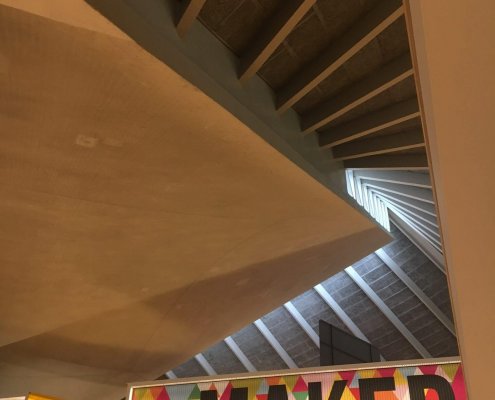 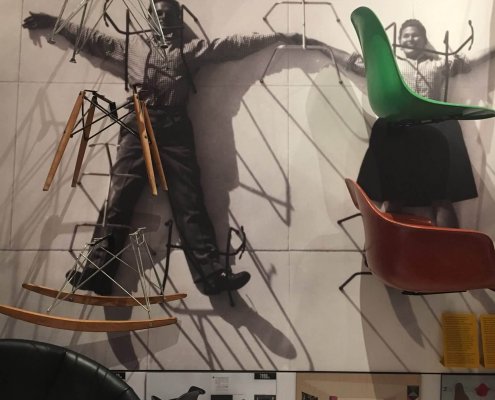 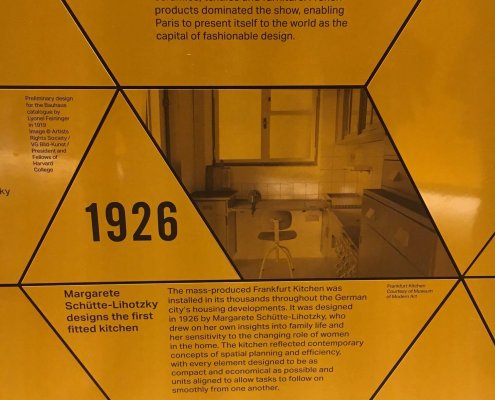 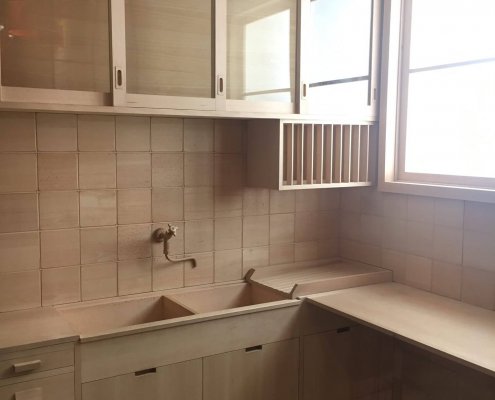 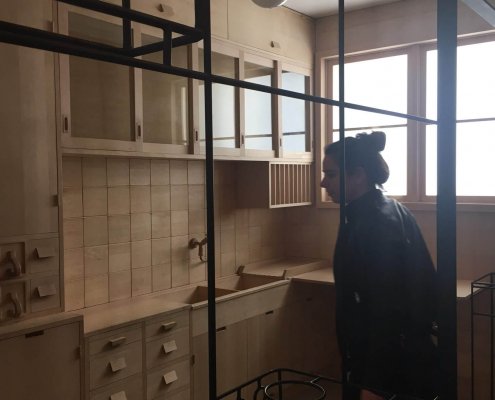 A timeline of influential dates that are important in the design world is shown as you enter the exhibition and 1926 is particularly interesting as this was the year that Margarete Schutte- Lihotzky designed the first fitted kitchen. “The mass produced Frankfurt kitchen was installed in its thousands throughout the German city’s housing developments.” Schutte- Lihotzky drew on her own insights into the family home and the changing role of women. The kitchen reflected contemporary concepts of spatial planning and efficiency, with every element designed to be as compact and economical as possible and units aligned to allow tasks to follow on smoothly from one another. Prior to the introduction of the fitted kitchen, there were no standards for kitchens to conform to. Work surfaces were often placed at different, uncomfortable levels, and there was no logic to the placement of items with related functions, such as the ergonomics of the fridge, cooker and sink zones.

At this point, it’s interesting to note that SieMatic was founded in 1929 and their first products were exhibited in 1931 at the Leipzig Trade Fair. A lot has changed since then, with the introduction of the handleless kitchen in the 1960’s, the BeauxArts collection was introduced in 2006 in collaboration with Mick De Giulio and more recently in 2015 the new URBAN collection was introduced.

The fitted kitchen has moved on significantly since 1926 and SieMatic are always at the forefront of new design and innovation. For us at ArtHouse Creative Interiors, an exclusive SieMatic showroom, we are excited to see what the future holds for kitchen design in relation to the needs and wants of the makers and users.

Neolith – New products on the scene
We use cookies on our website to give you the most relevant experience by remembering your preferences and repeat visits. By clicking “Accept All”, you consent to the use of ALL the cookies. However, you may visit "Cookie Settings" to provide a controlled consent.
Cookie SettingsAccept All
Manage consent

This website uses cookies to improve your experience while you navigate through the website. Out of these, the cookies that are categorized as necessary are stored on your browser as they are essential for the working of basic functionalities of the website. We also use third-party cookies that help us analyze and understand how you use this website. These cookies will be stored in your browser only with your consent. You also have the option to opt-out of these cookies. But opting out of some of these cookies may affect your browsing experience.
Necessary Always Enabled
Necessary cookies are absolutely essential for the website to function properly. These cookies ensure basic functionalities and security features of the website, anonymously.
Functional
Functional cookies help to perform certain functionalities like sharing the content of the website on social media platforms, collect feedbacks, and other third-party features.
Performance
Performance cookies are used to understand and analyze the key performance indexes of the website which helps in delivering a better user experience for the visitors.
Analytics
Analytical cookies are used to understand how visitors interact with the website. These cookies help provide information on metrics the number of visitors, bounce rate, traffic source, etc.
Advertisement
Advertisement cookies are used to provide visitors with relevant ads and marketing campaigns. These cookies track visitors across websites and collect information to provide customized ads.
Others
Other uncategorized cookies are those that are being analyzed and have not been classified into a category as yet.
SAVE & ACCEPT
Posting....
Download Brochure
x
Scroll to top